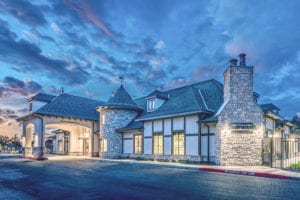 The Springfield, Missouri-based franchise, with 20 sites around the United States, isn’t a one-size-fits-all model of days of preschool yore, with juice, naptime, maybe some games and not much else. This school – which had a ribbon-cutting Nov. 18 for its $5-million campus at 5370 Douglas Blvd. – features red carpet drop-off and yoga for parents to check in on their kids.

It’s a high-end school for a high-end area like Granite Bay, where the average annual household income is roughly $110,000.

For Little Sunshine’s CEO Rochette Dahler, who founded the system’s first school in 2002, the enterprise grew out of her desire to provide the right kind of preschool for her first child, with whom she was pregnant at the time.

“I think it’s the same thing that motivates any parent: you just want the best for your child, and if you don’t see it available in the market, sometimes you’re willing to go to extreme lengths to provide that.”

Employing the “Reggio Emilia” philosophy of preschool education, Little Sunshine’s takes a bit of a different approach to preschool. For one thing, Dahler said, the classroom is considered a third teacher, with an ever-changing environment and 24 different themes depending on what the children are being taught.

“The children, for the most part, are given very open-ended activities, very project-based activities,” Dahler said. “Really, it’s directed play.”

Reviews of Little Sunshine’s have been mostly positive on the website Glassdoor.com, where anonymous current and former employees can leave feedback. The main page averages an approximate four-star out of five rating, with 73 percent of respondents saying they’d recommend working there to a friend.

Some of the limited criticism on the page revolved around high demands of staff and turnover, though Dahler stressed in her interview for this story that overall, things were going well. She said aside from the school’s financial success, she was pleased with employee potential to advance within the company.

She noted that with the school being around as long as it has, some former students are even starting to teach there.

They keep an eye on the educational progress of students as well.

“We’re able to track their developmental… milestones to make sure they’re getting ready and prepared for kindergarten,” Dahler said.

Roughly a week before its scheduled Nov. 27 opening, Little Sunshine’s Granite Bay school was 70 percent pre-enrolled. In time, it could become the first of many locations in California.

With approximately 20 active schools, one in construction and another eight in development, there could be much more to come for Little Sunshine’s – perhaps as many as 100 schools nationally.

“As long as I’m happy continuing to do what I’m doing, I think that we’ll just keep on growing and going directly down this path,” Dahler said.

Spending Quality Time with Your Kids

2020 National Teacher of the Year